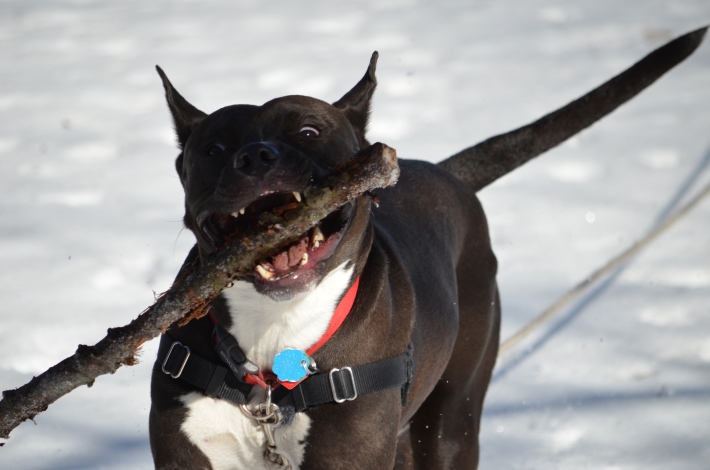 Our dog Ollie had three strikes against him when he started, at least, those are the strikes we know of. First, he’s an American Staffordshire Terrier (pit bull, for those not in with the American Kennel Club). We know him to be intelligent, a fast learner, curious and ridiculously loving and protective. He’s a sweet, gentle soul. Many in this world, however, presume the breed is only for fighting, is very dangerous and is indicative of a lifestyle connected to drugs, crime and trouble.

Dear Ollie faces discrimination from the moment he wakes up to the moment he falls asleep in a mushy pile under his special dog blanket, paws outstretched necessarily touching his bedmates as he snores. The thing is, we don’t think he cares.

Strike two for this handsome pooch is that he was found as a stray. Lost or abandoned, we don’t know which, but in his young life, he was homeless for a period and probably very confused as he wandered around, shooed and shunned by passersby because of how he looked.

Strike three was that he was picked up by domestic animal control, a necessary entity in an overcrowded world of breeders, fighters, lost dogs and public health. Through no fault of their own, animal control facilities are often understaffed, overcrowded and have, sadly, a mandate to ease the pet population. Ours, though it does work with spay and neuter programs to achieve this goal, is not yet a fully no-kill shelter. This was Ollie’s time-sensitive home when we met him.

Arguably, there was a fourth strike against him, but that’s a matter of opinion: the shelter staff named him LeBron.

When we fostered him, our first stab at such a venture, his soulful eyes asked politely and timidly to sit on the couch with us (and who could say no?). His left paw immediately learned that a “nice to meet you, Ollie” meant lift and shake. Within days he was sitting, waiting to dive into his food and had wiggled his waistline into tip top shape every time we surprised him by simply returning from wherever we had gone.

When we took him to the foster gathering for folks to meet and greet him and potentially adopt him, we broke down. Interested parties were ready to adopt Ollie and we snuck out the back door with him, calling the shelter immediately and explaining WE would adopt our baby dog. Affectionately known as “foster failures” with us, it seemed Ollie had gone from strikes to home runs.

There’s a lesson in this picture that we’ve learned from Ollie, and we want to share it. My caption for this photo is “I wish I loved anything as much as Ollie loves playing with his stick.”

This spoiled rotten baby has every toy imaginable, from gutted stuffed animals and cat toys he’s pilfered from his feline siblings to top-of-the-line designer toys made of space-aged indestructible materials. Yet, when we go out to play, he wants a stick. He devotes himself to it with complete abandon and makes noises and rumbles like an ancient king plowing through a delicious feast. He taps you with the stick, saying “look, look at my stick!” He gnaws and chisels away at it as though the texture is pure bliss.

If you can wry it from him (he’s still learning “drop” which he does for other toys, but not as well for his friend, The Stick), and he is instantly alert, concerned for his friend and wags uncontrollably, knowing for certain the next thing in his world is to see this beautiful favorite thing fly through the air. For all we know, it talks to him, screaming his name as it traverses overhead, begging him to capture it. He behaves as if that is true and each time he pounces on The Stick, he is a hero, again and again.

There is a lesson here for all of us. Having passion is the easiest thing there is, despite all odds. No matter how you look, what people think of you, how you got started in this world or how warm and fuzzy your bed is…it’s so easy to love something unconditionally and approach it as new each and every time you encounter it. It’s so simple, you just do it.

Our Stick may be a job, a book, a project, a performance, but each time we grab at it, if we can do it with the same abandon and passion that Ollie does, imagine how successful we’d be. That’s the lesson in Ollie’s passion: you’re always successful. You always get The Stick. Whether you catch it, pounce on it, steal it from your doggie bag, gnaw an end of it, or just wag it around to show people…there’s no right answer to it, you just love it, want it, go for it, embrace it.

It doesn’t have to be fancy, either. It’s not space-aged, it’s not high-tech. It seems as though it’s just A Stick. But to Ollie, this Stick is everything. He has a big, massive head, and he’s a smart dog, but I can’t imagine thoughts more complex than “Ohhhhh! Stick!!!” going through his head when he sees it. He doesn’t over analyze it, fear it, shun it or take it for granted. It’s more than A Stick. To the humans who are his pets, it represents walks outside, playtime, learning and love. Your Stick can represent all that if you want, but the one requirement is that you figure out what The Stick is for you, and love it with the same simple abandon that Ollie does. Look at his picture again and think to a time when you made that face, when you exuded such happiness. That was a time you were playing with your Stick and you should take note. Passion is the answer; appearances, obstacles, other people’s opinions–none of that matters. Love your Stick simply and always and you’ll be living a dog’s life.

What Else I’ve Said…